Ok this competition is just too much fun. It has had my mind working over time I still have another Beatles card that I am working on. The challenge was to adapt some Anya and Ian stamps into your fav rock stars. 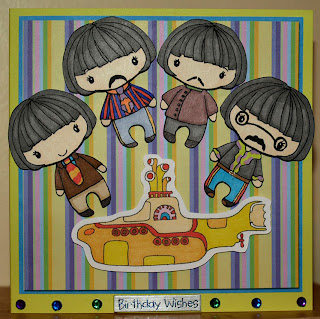 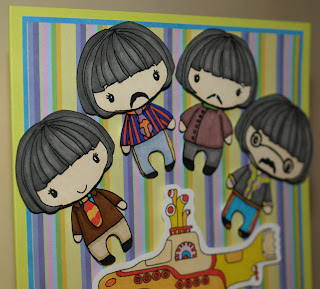 For this card I have tried to make a likeness of the fab four. The hair is inspired by wickedpixie's Ramones. I have used the body of dress up Ian as the shape and then made my own clothes based on the cartoon beatles outfits from the yellow submarine. I drew them all out and then scanned them in so i could print more of one and decoupage them a bit so their faces stand out a bit more. They are all coloured with promarkers as is my version of the yellow submarine that I have drawn out. 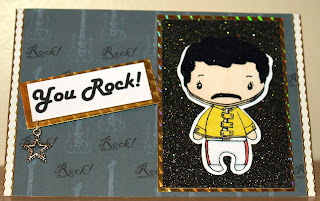 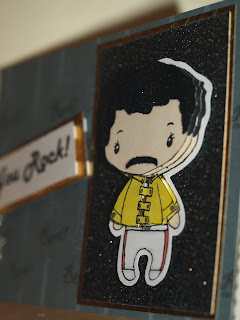 For this card I have tried to make a likeness of the The amazing Freddie Mercury. I thought I'd have some real fun with his hair and tash so they are both black sparkly fun flocked. I have used the body of dress up Ian again as the shape and then made my own clothes based on his iconic live aid outfit. I drew them all out and then scanned them in so I could print more of one and decoupage him a bit. he is coloured with promarkers and sakura stardust pens for a little extra sparkle. 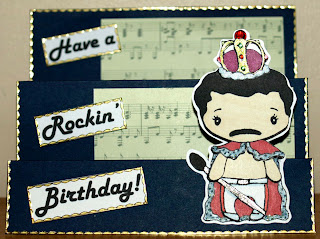 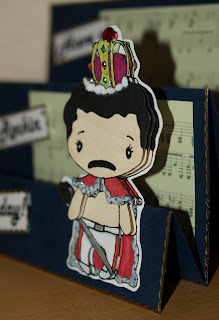 here is my second Freddie card. This time another iconic outfits showing him as the king he was and still is
I have flocked the edges of his cape and the bottom of his crown so have not put flock on his hair this time. I am not really very happy with the microphone (yes that is ment to be a mic) but it gives the idea. I have added some gems to his crown and because I can not resist the sparkly things in life I have also coloured it with sakura pens. Then my boarder peel off fetish has kicked in so everything has a gold edge
The backing paper for this is actually sheet music for "don't stop me now" not that anyone I give it to will know but it made me smile to use it (sad aren't I).
Posted by crafty amy at Wednesday, March 25, 2009

Wow Amy they are all fantastic!!! You have done a blooming brilliant job...love em all!!
I know a dance to don't stop me know...its my party peice and we had loads of people all dancing to it at the party friday night...so funny!!
Emma x 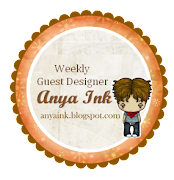 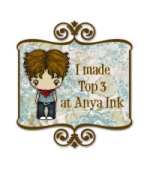 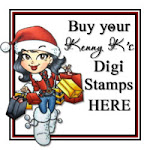